Sugar. It’s an ingredient long demonized by physique-conscious athletes, but is it always as bad as it’s made out to be? After all, you’ll find added sugars on nutrition labels for everything from sports drinks to energy gels and protein bars, all of which are geared toward athletes.

While sugary foods, particularly those with added sugars, shouldn’t make up the majority of the carbohydrates in your diet for health reasons most are familiar with, like diabetes or potential heart issues, enjoying them every once in a while won’t derail your progress. And if you’re eating them after a particularly hard workout, they might just help your muscles out.

Before we get into sugar and its role in workouts specifically, it’s important to understand that carbohydrates, a main source of energy in the body that play a key role in every body function, including your workouts, fall into three general categories: simple, complex, and fiber. Simple carbs are sugars, which are digested quickly and provide the body with quick energy.

In the long run, eating a good balance of carbs, protein, and fats is something that will help any trainee reach their goals, whether that’s bulking or cutting. But it’s a particularly good idea to make sure you get carbs in both before and after a workout—and ingesting simple carbs, aka sugar, during a workout can even be helpful if it’s a particularly intense one or if training volume is high.

You want to make sure carbs are a part of your diet if you train hard because during an intense workout, your muscles literally depend on them. Whether you ingest quick-digesting or complex carbs, the body breaks all digestible carbs down into simple sugars, which all end up as glucose, aka blood sugar. In turn, some of that glucose is converted into glycogen, and some of that glycogen goes on to be stored in muscles for use as fuel later on.

For optimal performance, muscles need to have glycogen on hand. During a high-intensity workout, muscles are almost entirely fueled by glycogen. Even during a moderately intense workout, muscles draw about 50 percent of their energy from it. And when an athlete hits the notorious “wall” during a workout, that’s a result of depleted glycogen.

For that reason, eating a meal with slower digesting complex carbs about 2 to 4 hours before a workout is a good idea. That gives you time to digest and use those carbs as sustained fuel since they take longer to process. It’s particularly important if your workout will last longer than an hour.

But even if you’re properly fueled, glucose and glycogen will end up depleted the longer your workout goes on.

For a workout lasting more than an hour—and we’re talking an intense one, not taking extended mid-workout breaks to check your Instagram feed—it can be beneficial to drink or eat something sugary to maintain your blood sugar and give muscles the glycogen they need to keep going strong. Sports drinks or a shake that has both sugar and water are good choices, since they digest quickly while helping replenish water lost during the workout.

And every athlete knows that after a workout, it’s time to eat. Countless old-school trainers told cautionary tales of the 30-minute “anabolic window,” in which trainees had better chug a protein shake lest they lose their precious gains. There’s conflicting evidence on that front, but one thing’s for sure when it comes to the depleted glycogen we discussed earlier: a high-carb meal or snack after a workout will replenish them.

Where carbs are concerned, research has shown that consuming about 0.5 grams per pound of bodyweight within 30 minutes to an hour after heavy lifting maximizes glycogen recovery and slows muscle-protein breakdown. Getting those carbs in while your blood is still pumping hard can help that glycogen get to the muscles that need it.

Many bodybuilders know this and formulate their shakes with simple carbs and protein to kickstart that recovery, and some take the opportunity to indulge during this window, enjoying things that typically wouldn’t be part of their diet. One popular option is gummy bears or other candies that are essentially straight-up sugar. Others may go for a small piece of cake or sugary cereal.

If you ask us, there’s no better time to treat yourself to a half-pound cookie from My Cookie Dealer. They might be the only cookies around that look normal-sized next to the biggest bodybuilders in the game, so it’s no surprise that they would be a well-suited post-workout sugar kick. 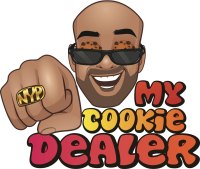 Get the Basics… Overcoming Tragedy with Triumph Providing Options for Optimized Training Creating Processes and Procedures for Business Development Utilizing Documentation and Delegation for Leadership Development Prioritizing Problem-Solving over Pitching Products Starting your own fitness business comes with a lot of risk and a lot of unexpected moments. Sometimes the unexpected comes in the form […]

Per Bernal / M+F Magazine The Des Pyrenees bodybuilding competition doesn’t have a handicap division—but that didn’t stop Edgard John-Augustin, a bodybuilder with two prosthetic legs, from standing among the able-bodied competition. Unfortunately, while John-Augustin was allowed to pose in the 2015 show, he wasn’t allowed to be judged. Still, his performance was so impressive that […]