Actor and fitness model Darius Dar-Khan, who has achieved considerable international recognition by being cast in the epic series Game of Thrones, is long, lean, muscular and exotic looking, a consequence of his Iranian heritage.  However, he was actually born and raised in London, England, and that’s where he began his career.

As a teenager, nobody would likely have predicted Darius would one day be cast as a muscular action hero.  “I was 6’1” tall but very skinny,” he says.  “Then I started going to a gym to put on some muscle mass, using workouts I saw published in magazines like Muscle & Fitness and Flex. But while I admired top bodybuilders like Dorian Yates and Mike Christian, it was clear to me that I lacked the genetics to build that kind of body.  So, instead, I looked to individuals like Fabio or Jean-Claude Van Damme as examples of those who used bodybuilding methods to create very promotable muscular and defined bodies.”

Darius admired bodybuilders like Mike Christian, but knew he lacked the genetics to create this kind of body. Bill Dobbins

Darius Dar-Khan brings intensity both to his workouts and his acting. Bill Dobbins 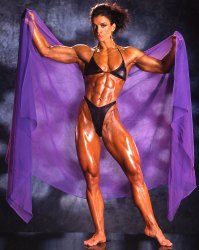 Darius is a big fan of Sharon Bruneau. They are both fit, muscular and exotic looking. Bill Dobbins

Darius is also a big fan of bodybuilder Sharon Bruneau.  He feels they have a lot in common – such as having fashion model bodies with added muscle and muscularity, as well as striking and highly exotic good looks.

As a youngster, Darius excelled at competitive track and field and swimming, and he had a background in disciplined athletic training.  So, when he decided to take up serious weight training, he already had the necessary work ethic but at that point needed more info about specific bodybuilding workouts and diet.  And that’s where studying bodybuilding magazines came into play. 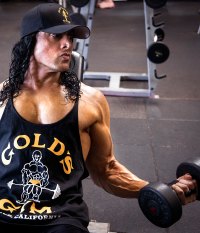 Getting started weight training, Darius studied training articles in Muscle & Fitness and Flex – most of which were illustrated with photos shot at Gold’s Gym, Venice. Bill Dobbins

“I started focusing on weight training in a gym at age seventeen,” he explains, “and by nineteen my muscularity and definition had improved to the point where I started getting fitness modeling jobs on the runway and having my photos published in top fashion magazines and advertisements.”  Between modeling assignments, Darius worked at a bouncer at one of London’s top night clubs, and as a bodyguard for billionaire Richard Branson.  “Having a more muscular physique, even though I was not the size of a competitive bodybuilder, has opened a lot of doors for me.” 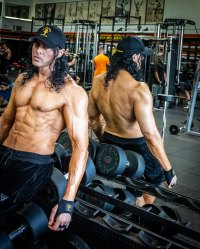 “Having a more muscular physique, even though I was not the size of a competitive bodybuilder, has opened a lot of doors for me as a model and now as an actor” Bill Dobbins 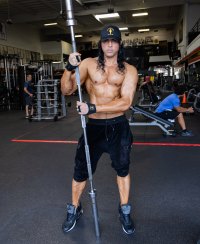 Weapons of choice in the gym include barbells, not swords or spears. Bill Dobbins

Acting at that point was not one of his major goals, but sometimes life chooses you rather than the other way around.  When he attended a bodybuilding contest, he ran into a friend who knew a talent agent, the friend put them together and Darius was signed on as a client.  “I wanted to make the most of the opportunity, so I started taking acting classes.  So, when the opportunity to be cast in Game of Thrones came about, I had at least some acting training and experience.”

It turns out that there wasn’t a huge amount of competition for the role of warrior “Khal Quorro.”  Darius had a unique look and he turned out to be just what the production was looking for.  In fact, he was so right for the part that he didn’t even need to wear a wig to portray the character – his thick black hair was just what the show was looking for.

The filming was done in Northern Ireland, and Darius says it was just as rugged and demanding as it looks on TV.  He did his best to keep up the necessary amount of physical training and maintained his definition by being very careful about his diet.  No desserts and other pastries from craft services.  Game of Thrones was such an international success, and he got so much attention and promotion, that Darius decided (as did others like Arnold and Jean-Claude), that his next stop should be Hollywood.  So, he made plans to relocate to California and went about finding American agents and managers to continue his career.

“I was always aware of the importance and traditions of Gold’s Gym in Venice,” Darius says, “so I was super happy when I got the offer to shoot photos at Gold’s for a Muscle & Fitness article.  A lot of the exercise articles in the magazines that I used to educate myself, were illustrated with photos shot at Gold’s Gym.  I was thrilled when I walked in because of all the top pro bodybuilders who train or have trained at this gym. But people like gym manager Jeff Suender, world champion Helle Trevino, legendary trainer Charles Glass and pro fitness and figure champion Arina Manta, greeted me and made me feel right at home.” 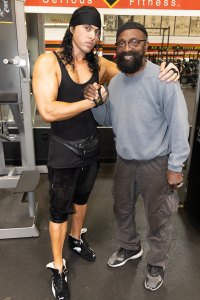 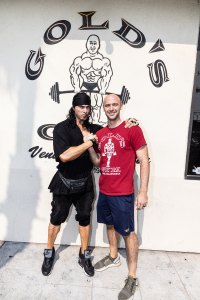 “Plus, I was being photographed by Bill Dobbins, who has been shooting gym pics at Gold’s for decades.  So, I really felt I was in the best of hands.”

In terms of his future, Darius Dar Khan wants to be able to change muscle mass or definition as a given acting role warrants.  “There are roles where increased muscle size is what is called for, and others when a leaner, sleeker look is required.  I’ve seen Hollywood actors who seem to be able to make radical changes in their bodies as necessary, so I plan to be able to do the same thing.  The best way to do this is using the basic methods of bodybuilding workouts and diet. The whole point of bodybuilding training and diet is all about bring able to control your body composition – bigger, smaller, more or less defined and muscular.”

“I saw an interview with Russell Crowe, who has been known to change his body a lot for specific movie roles.  He said that an actor’s body is just one of many tools he has in order to believably create different kinds of characters.  So, while I will continue to develop my ability as an actor, I will also keep hitting the gym to develop and maintain my physique.” 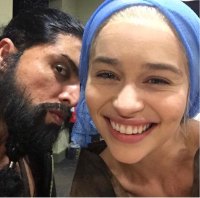 Selfie of Darius with Emilia Clark – The Khaleesi from Game of Thrones. @dariusdarkhanactormodel/Instagram

How Rory MacDonald Stayed Fight Fit During the Pandemic

Nearly a year since he announced his signing with the Professional Fighters League, Rory MacDonald expected he’d be spending the fall getting ready for the MMA league’s semifinal round before advancing to New Year’s Eve’s PFL Championships. Instead, MacDonald remains indefinitely preparing for his PFL debut. The former UFC and Bellator superstar was set to […]

Creatine is a naturally occurring source of energy for our muscles. It is not a steroid and it does not directly affect a users’ testosterone levels. Around 95% of the creatine in our body is stored in skeletal muscle but small amounts are also found in the heart, brain and other tissues. The average omnivore […]

Lou Ferrigno Will Become a Deputy Sheriff in New Mexico

Smeal/BEI/Shutterstock New Mexican criminals better think twice before making Socorro County’s deputy sheriff angry—because they wouldn’t like him when he’s angry. Lou Ferrigno, the former bodybuilder and legendary Incredible Hulk TV actor, will be deputized as a deputy sheriff in the county during a special ceremony, according to various reports.  It won’t be the first […]